Epigenetics and the Microbiome

Epigenetics and the Microbiome

Epigenetics and Gastrointestinal Microbiomes Influence on the Gut-Brain Axis and its Effect on Disease Causation and Prevention.

As we all know as laboratory diagnostic interpretations improve and we not only know more what markers to look for when testing, but also correlate what the values may determine, leading to new trends in healthcare or science in general. Many practitioners and researchers are becoming aware of the influence of our gastrointestinal (GI) microbiome and its influence upon the brains cognitive function, but few have realized that the brain also greatly influences the microbiome itself. Many factors may affect this intercommunication pathway ranging from stress, injury, emotion, dietary habits and even our environmental surroundings. These can alter the tolerance of the GI tract including the epithelial barrier, GI motility, nutrient and byproduct absorption and secretion, as well as the enteric nervous system. All the data presented here is a compilation of many studies and interpreted in a way to pave the pathway to new research to gain a better understanding of the relationship between lifestyle choices and behavior and their influence on the GI microbiome, and vice versa. This will be an ongoing research protocol for myself, so please stick with me as it grows.

What is the Gut Brain Axis?

The gut-brain axis (GBA) is a bidirectional signaling mechanism that exists between the gastrointestinal (GI) tract and the brain, integrating the functions crucial to maintaining homeostasis via hormonal, immunological, and neurological communications.1 As the GBA becomes disrupted, we see the GI bacterial balance start to stray from its normal colonies. Hence the GBA has been highly attributed to gut dysbiosis and inflammatory bowel disease2 (IBD) following traumatic brain injuries (TBI).

Although it is not entirely clear as to what exact mechanism is in place for the influence that the microbiome may play in the functionality of the brain, many current studies are occurring to continue gathering information. We do know that there are 1014 microorganisms living in the human body with a large number of them residing in the GI tract, with this the microbiome consist of 100 times more genes than that of the human genome, therefore the microflora has been referred to as the forgotten organ 3. Although the bacterial species vary distinctively between one person to the next 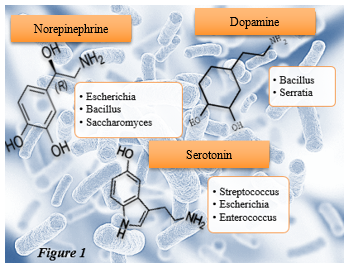 The primary phyla that the biome consists of are Bacteroidetes, Firmicutes, Actinobacteria, and Proteobacteria. Key neuroendocrine transmitters such as norepinephrine (NE), Serotonin (5-HT), and Dopamine (DA) have been linked to certain microorganisms.4 (Fig. 1)  We also know that higher levels of Actinobacteria and Firmicutes, including lactobacilli, in the GI are indicators of a good marker for health. Generically speaking, those with autoimmune disease and obesity5 tend to have a decreased amount of these phyla. 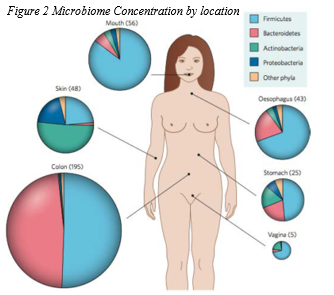 Generally speaking, we are more proactive in dealing with stress when our gut microflora is more balanced between commensals and opportunists. In a balanced microflora we see the release of metabolites that act as endocrines leading to neurotransmitter response mechanisms. This is done so through M cells presenting cells to immune system leading to increased dendritic cells response to invaders. An example being Proteobacteria gram (–) lipopolysaccharide that lead to localized inflammatory responses and in some cases, systemically.

Microbiota and the Immune System 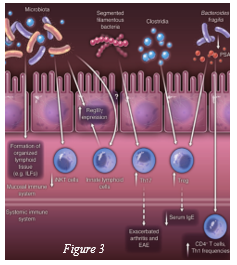 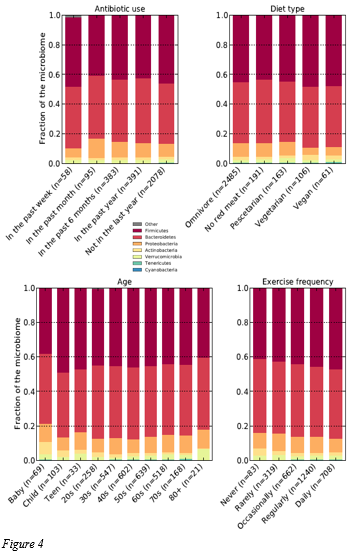 Microbiome and GBA in Relation to Health and Disease

Based on animal studies done, the microbiome in fact does influence the ability of the brain to function and even goes as far to modify our social behaviors.

Plant sources such as vegetables and fruits used for human consumption have been shown to lead to an increased number of beneficial microbiota and it is believed to be due to the plants containing endophytes. We also know that exercise, sleep, stress and other foods play a substantial role in this balance as well.

The microbiome has been tested for many years, however it was not until 2007 when that National Institutes of Health (NIH) launched the Human Microbiome Project (HMP). The first phase of HMP lasted from 2007 until 2012 and was responsible for developing metagenomics datasets and establishing tools for characterizing the microbiome in healthy adults and cohorts of specific microbiome-associated diseases. 7 As with the exponential number of variant organisms inhabiting GI in any given persons this leaves a large portion of the genome that has yet to still be isolated and sequenced, attributed to the inability to equally reproduce the growing conditions in a lab. Metagenomics, which is the study of microbial communities from environmental samples. 8 The HMP is using 16s rRNA and the metagenomic sequencing to map out the human microbiome in a total of 15-18 locations. Here is an example of some of the data being compiled, and a chart of the phyla collected (Fig 5.)9

As this compilation is primarily about that involving the GBA, we will only be focusing on the microbiome testing involving the GI tract. Currently there are two mainstream testing agencies that the public as well as practitioners have access to, being µBiome and American Gut. µBiome offers testing for a range of 1-5 sites and priced $89-$399.  American Gut is offering testing from one to all areas and ranging from prices of $75-$25,000. These tests are all done at the subjects own will and financial obligation, as these are still elective laboratory interpretations. All of the data collected from these projects are being databased and mapped1> to divide into phyla and comparatively charted with the respective known diseases.

Laboratory diagnostic protocols must be followed to be represented in the HMP collection of data. The protocols in an abbreviated manor are testing the 454 16S to verify against each sample and the local and community databases, and against human contamination. The full protocol may be found here. Microbiome testing is still in the “experimental” phase, not because the testing is not adequate, but more so that it is not known fully how to interpret and clinically apply all the data collected. The more data that is added in the HMP database the greater the relevance of the collected database as we can start noticing trends of phyla or even particular bacterial organism in relation to health and disease.